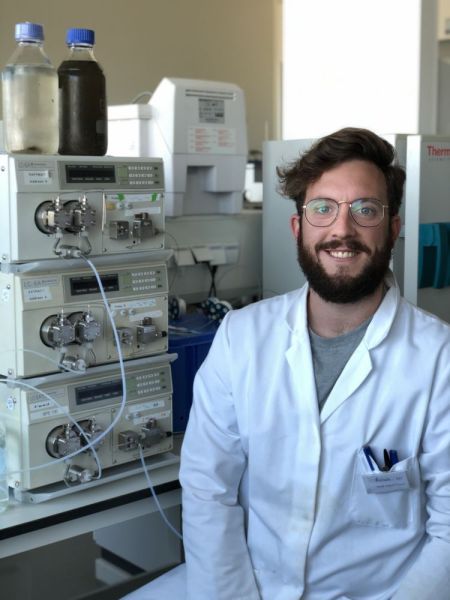 David Calderón Franco studied the BSc in Biotechnology at the Autonomous University of Barcelona, Spain, and then pursued a MSc in Bioengineering at the Institut Químic de Sarrià – Ramon Llull University and a second joint MSc in Bioinformatics and Biostatistics between Barcelona University and the Open University of Catalonia.

David moved to Copenhagen, Denmark, in 2016 to do his Master End Project at the Novo Nordisk Foundation Center for Biosustainability, where he focused his research on engineering metabolically yeast strains to produce high-valuable products. Then he moved to Basel, Switzerland, to do his internship at FGen focused on improving strain selection methodologies.

After the completion of his internship and due to his experience with genetically modified organisms and their risks, David was granted a Ph.D. position from TU Delft with the financial support of the Netherlands Organization for Scientific Research (NWO) on the Transmission of Antimicrobial Resistance Genes and Engineered DNA from Transgenic Biosystems in Nature (TARGETBIO) research project. David is pursuing his Ph.D in the Weissbrodt Group for Environmental Life Science Engineering under David Weissbrodt, Mark van Loosdrecht and Thomas Abeel supervision. David’s project has focused on determining the origin, fate, persistence and removal of Antibiotic Resistance Genes (ARGs) and Mobile Genetic Elements (MGEs) during the wastewater process. David has focused his research on developing methodologies to effectively isolate and remove free-floating extracellular DNA from wastewater samples to better understand horizontal gene transfer phenomena such as natural transformation. This will support water authorities in the delineation of measures to adopt at wastewater treatment plants to remove them and safeguard environmental and public health.

Within his participation in REPARES, David, on behalf of TU Delft, will work on developing standardized procedures for ARGs and MGEs quantification from wastewater samples as well as foster with other colleagues the communication of the project outputs and outcomes.